This week I took my four year old grandson to Boya quarry for the first time. He was very interested in the rock climbers that we saw practicing their skills there. One young man was being coached, while two others held the rope and gave helpful hints on feet and hand placements. It seemed very hard work for the trainee, stretching his legs and arms in what seemed to me to be completely impossible positions, but as he pushed his body to greater and what seemed like more dangerous limits, he was never left alone to struggle. 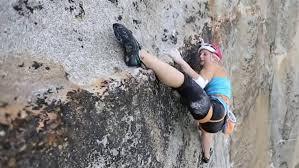 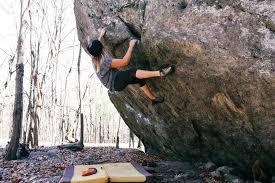 He was encouraged all the way. He had lots of attempts at placing his feet and hands just right in order to pull himself up to the each level where he hooked himself on and then hung there for a few minutes to get his breath back.  After a while, he called time on these attempts, as he was exhausted, and he asked to come down for a rest. The lady on the ropes assisted him to come down and he sat for a while gaining his strength back and having a drink before being brave enough to have another go.

Grandson asked what would happen if he fell. I pointed out that he was safe because he was being supported by the person holding the rope at the bottom, and that he was attaching himself onto hooks already drilled into the rock face as he went. Even if he lost his footing he would be safely held. He would not fall. Grandson, then asked how did the hooks get into the rockface and who put them there. You know how little people can be so persistent at asking multitudes of questions? I told him I wasn’t sure, but that he could ask the man who was supervising, which he then did.

We found out that before they send a trainee up the rock face, the person supervising has to go up without any support, and put the hooks into the rock ready for the person who is learning. ‘Isn’t that dangerous?’ was grandson’s astonished next question. ‘Yes, it is’, we were told but, because they have taught many people to climb rocks, they know what they are doing and prepare very carefully, taking no risks. Nothing is left to chance. Everything is checked very carefully. They prepare in advance for each of the learners and the exact stage they are working at.

What has this got to do with learning to read or understand maths?

Well, in 1998 a paper was published by J K Torgeson that emphasised the importance of catching problems in reading before the student fails. Here is a link to the original paper, if you want to read it yourself. It’s called Catch them Before They Fall.

Catch them Before They Fall

Now, Torgeson is widely respected in the field of learning difficulties. A quick google search showed that he has published 94 research works with 13288 citations and 32592 reads. From this we know that this fellow is a giant in the field, and if he publishes something, we should take note right? Remember this was 1998. . . yes, that’s right, 1998, and here we still are . .

‘The best solution to the problem of reading failure is to allocate resources for early identification and prevention. It is a tragedy of the first order that while we know clearly the costs of waiting too long, few school districts have in place a mechanism to identify and help children before failure takes hold. Indeed, in the majority of cases, there is no systematic identification until third grade, by which time successful remediation is more difficult and more costly’.

Whilst I know that there are many schools now taking the scientific research on literacy seriously, there are still those who seem to have their ostrich like heads in the sand, seemingly if they don’t look at it, maybe the threat will go away. Just this past week, I’ve had two parents ring me, one with a child in grade two and the other in grade three. Both families have a genetic history of learning difficulties and dyslexia in their family. Both were informed in year one that their child had problems, but both were told to wait and see if it was dyslexia because staff weren’t sure. One family had some intervention, but not in an evidenced based program that is suitable for dyslexic students, and the other had no intervention – they  both had to wait and  see. . .  So, in essence, once we find out if it is dyslexia then we will give you some help. These examples unfortunately, are not isolated events. It happens regularly in my centre. It’s great to see that teachers in general are becoming much more aware of what learning difficulties, including dyslexia look like, but there is still a lot more information that needs to be gained about what to do when you spot a problem.

We know dyslexia is inherited. We have known this for quite some time. Skilled kindergarten and preprimary teachers can spot students who seem to be at risk of, or are already having problems in math or literacy, because there are well documented early indicators. That’s when intervention should  be started – right then in preprimary, or even dare I say it, in kindy. Regardless of whether the student goes onto to get a diagnosis or not, if the child is experiencing difficulties,  you intervene immediately.  If  families with a genetic history of dyslexia they should be on a ‘watch list’ as soon as they enter school, and as soon as signs are spotted they should be put into an evidence based intervention program – how much plainer does it need to be? Why leave it? What are you waiting to find out when you already know how it is presenting ? 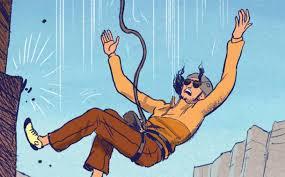 You don’t wait for them to fall!

You start helping now. If it is found that the child does not have a learning difficulty, no harm has been done, you will have benefited their learning anyway, because the programs to assist children with dyslexia help all children.

Early identification and interventions for dyslexia: a contemporary view

‘Scientific research on dyslexia has burgeoned during the past 50 years, and a great deal is now known about its nature, aetiology and assessment. Against this backdrop, it should be possible for educators to recognise the signs which suggest that a child is at risk of reading failure. Such early identification should allow interventions to be implemented before a downward spiral of underachievement, lowered self-esteem and poor motivation sets in’.

The Importance of Early Intervention for Reading Problems

Children at risk for significant reading problems can be identified as early as kindergarten. The National Institute of Child Health and Human Development (NICHD) has found that core deficits in phonological and phonemic awareness are the underlying cause of significant early reading problems’.

‘Early intervention for reading difficulties makes a significant difference in the long-term reading abilities of children. According to the National Institutes of Health (NIH), 95 percent of children who have trouble learning to read can reach grade level if they receive specialized help early on. Kindergarten and first grade are deemed to be the “window of opportunity” to prevent longterm reading problems. Without early intervention, the “reading gap” between struggling readers and their peers continues to widen over time. Research has found that children who are reading below grade level in third grade rarely’.

Let’s go back to the rock climbing analogy.

It is known that rock climbing is high risk. Many people have died or have been significantly injured while engaged in this activity.  Before anyone attempts it for the first time, we already know that they will experience difficulties that could be lifelong, or more than that, they are risking death even if the appropriate safety measures are put in place. It’s a risky sport.

Let’s suppose, we suggest that we treat new rock climbers as we do new readers. We say to them, yes we know there is a risk that things might not go well, but let’s just wait and see. Once we have an official statement that you are in trouble, we will give you support. We supply no prior training, no special equipment. We find out that several of our new trainees, have a genetic history of physical coordination problems, but do not adapt the climb for them at all, and expect them to tackle climbs the same as everyone else. There is no safety net or rope.

Or perhaps we offer a generic premade program of how to climb rock faces. We have full confidence in the program because it looks glossy, and will save us all a lot of work because we won’t have to plan for any individuals with existing problems that attend our courses. This course is fantastic because it has lots of cutesy little hints that come in ready made hint card for the trainee rock climber. It’s great resource as the trainee can just clip it onto his belt and refer to it as he climbs.

Hold your hands in the shape needed to grab the rock.

Get your toes ready to climb.

Look at the whole rock for clues about what to do.

Stretch out your legs slowly to find the next place to move too.

Keep trying. Try to find a way that makes sense.

I can just skip over a hard bit and come back later.

This program has been recommended by several well known people in the business that have a vested interest in  it being sold. But that’s okay, they have lots of qualifications after their names and this must mean they know what they are doing.  We know they have our best interests at heart and really it costs so much money, it has to be good….doesn’t it?

Ridiculous right? Yes of course it is, and we would never do this, because we know the risks.  The results of injury could be lifelong.

But hang on a minute. . .  consider what is happening to children when we tell parents to wait and see if their child has learning difficulty, or wait another six months or a year to see if they catch up.

How poor reading and writing feeds the school-to-prison pipeline

This time in your child’s life will never come around again. A year waiting to see, when you already know there are problems is a year totally wasted in learning, and in my opinion total neglect of a child’s precious years. These become years when low self esteem and self belief increase and learning problems increase . If you are advised to wait and see, ignore it. You can’t wait and see  because the only thing that will become clearer is that your child has a learning difficulty and that intervention should have been started as soon as it was noticed.